The San Juan Unified School District is worried about an expected wave of middle school-age children in the western end of the school district, i.e. Arden Arcade. Our community has two discrete middle schools:  the recently-remodeled Arden Middle School at Watt and Arden and Arcade Fundamental Middle School (a district-wide school) at Watt and Edison. A third middle school has been embedded within Encina High School for some time, but the District eventually figured out that it did not work to have 6th, 7th and 8th graders at the high school. The School District also has quite a few 7th and 8th graders scattered around in various K-8 schools. To improve this situation, the District recently "established" a new middle school at Encina (with its own Principal) and gave it a name. It intends to relocate that middle school's students to a different location. OK, we get it: lots of new kids, including lots of new immigrants and refugees means you have to make room for them in appropriate elementary, middle and high schools. Fine. Then the next question is about the facilities - where do you put these kids?

That question has turned into something of a rush to judgement that has apparently resulted in fast-tracking a significant new middle school to be built at the site of the former Creekside School. It will serve up to 680 students from Ethan to Eastern and from Marconi to Cottage. To get to that decision, it sure looks like the School District's people created their own narrative without checking with the full range of stakeholders - like parents of children whose kids are supposed to attend the new school, neighborhood associations, owners of property adjacent to the site, and other public agencies with specific  jurisdictional responsibilities - that would normally be engaged in reaching some kind of understanding about the best use of tax dollars. It's not really clear that the School District reached out for opinions other than those they wanted to hear. Recently, some neighbors observed preparatory work being done at the site and contacted the School District's staff about it. It was the neighbor's first knowledge of the project. The District's response, essentially, was that the decision had been made and it was pointless to be concerned.

It's important to understand that the School District closed Creekside Elementary School years ago and formally declared that the site was surplus school property. Rather than offer other public jurisdictions the opportunity to take over the property (as required by state law), the School District tried to get a developer to buy the land. When no one stepped up, the School District let private companies rent the school - for a charter school, an autism school, etc. - and most recently placed several portable classrooms on the site for use as an adult school specializing in ESL classes for recent immigrants. It is also worthy of note that, while nearly every one would be happy to see the old school buildings replaced with something fresh and new, no one thinks the School District isn't entitled to do something with the site.

The School District projected its enrollments and chose Creekside during Covid and without much fanfare or consultation. That decision process seems to have been made in a silo, with the conclusion a public-be-damned decision. Though some might be tempted to give it a pass, this is a big deal. It's a very big deal, actually, not something to treat lightly. New middle schools aren't cheap. And they will last for a very long time. Decisions of this scale call for due diligence, something that might have gone missing in this case. What is due diligence, you ask? It's collecting and analyzing information before making a decision or conducting a transaction so the deciding party is not held legally liable for any loss or damage. Due diligence is the reasonable exercise of care taken before doing something. It means taking common-sense steps - like undertaking environmental analyses, evaluating supporting infrastructure, asking affected parties if they share your enthusiasm for the solution - before committing tax dollars to a large new building and tinkering with public roads to serve that building. So it seems like the School District has taken a huge risk, using your tax dollars for what could be a half-baked idea. If anything goes sour, guess who will wind up paying for it - you, the taxpayers.

The land is owned and operated by the School District. At the end of the day, though, it is the public's land. It belongs to the entire community. So should the School District do what its staff wants or what the community wants? And, if what the community wants matters, why not engage the community - the WHOLE community? Our elves tell us that people concerned about the School District's determination to barge ahead with a 680-some student middle school at Creekside, a former 400-person elementary school site that was declared surplus property long ago, are planning to be at the next School Board meeting on February 15th, hoping to get the Board Members' attention. We'll post more information to this page as it comes to us. 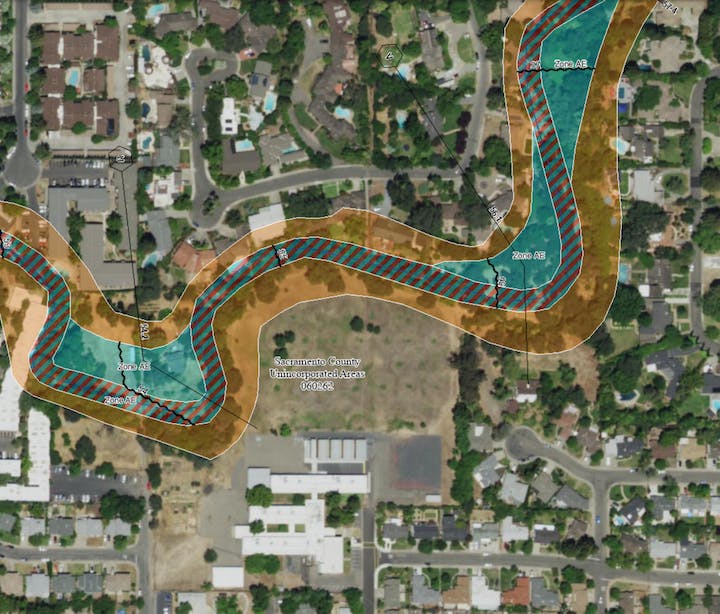 Yesterday the San Juan Unified School District released its draft Environmental Impact Report (EIR) for a proposed large new Middle School campus at the site of the old Creekside Elementary School. By doing so, the school district has begun a 45-day public review period. Comments on the draft document are due no later than Oct. 31, 2022. You can read and download the draft EIR at https://www.… 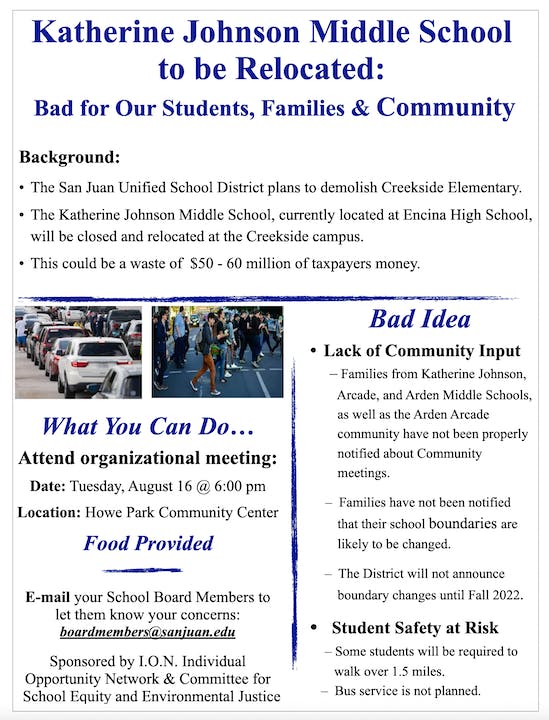 There will be a community meeting about the San Juan school district's proposal to remove the middle school students from the Encina/Greer complex. The district wants to: 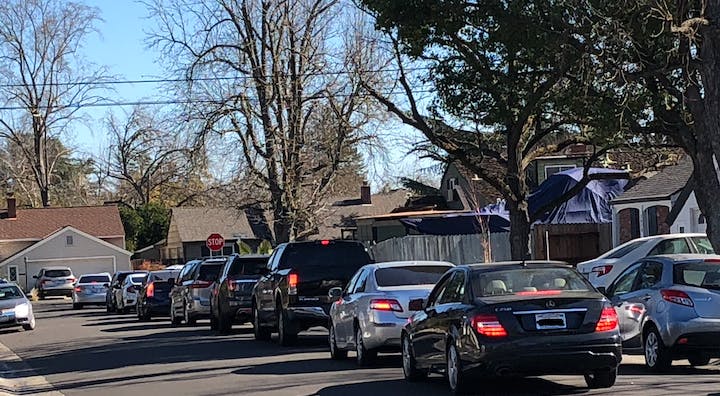 These days, school buses are pretty much a thing of the past. They cost a lot of money to operate. Some time many moons ago school districts figured out they could save money by outsourcing as much of their  transportation costs as possible to parents and high schoolers with drivers licenses. And, given our area's extraordinary lack of sidewalks and safe pedestrian pathways, who can blame the… 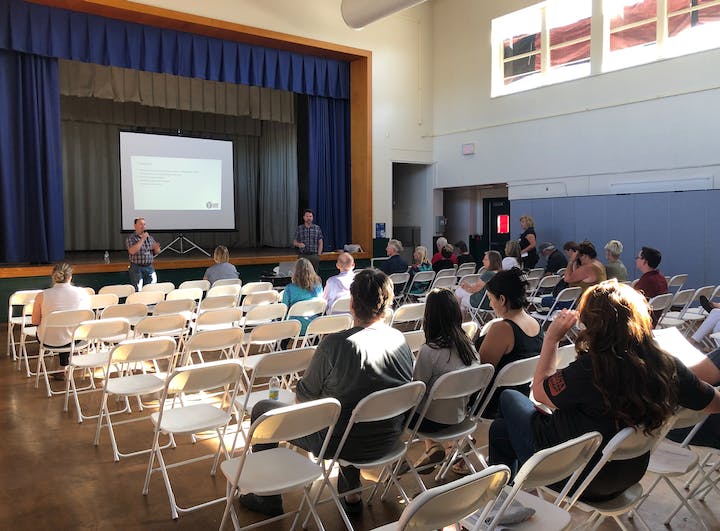 On June 30, 20122, the San Juan Unified School District held a "Scoping Meeting" for the public to listen to community and student concerns in preparation for the Environmental Impact Report (EIR) for the proposed large new middle school at the site of the former Creekside Elementary School. 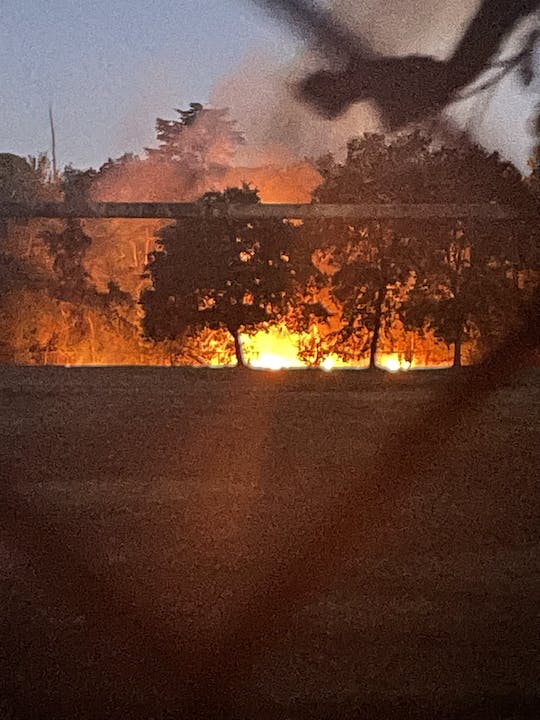 People living near the old Creekside Elementary School woke up to a wildfire early this morning. The fire erupted on the bank of Chicken Ranch Slough on the school property's northwest  side in an area that has been frequented by homeless individuals. When Metro Fire came to put it out, their crew had to struggle to unlock the gate into the school parking lot at the end of Kent. The padlocks there… 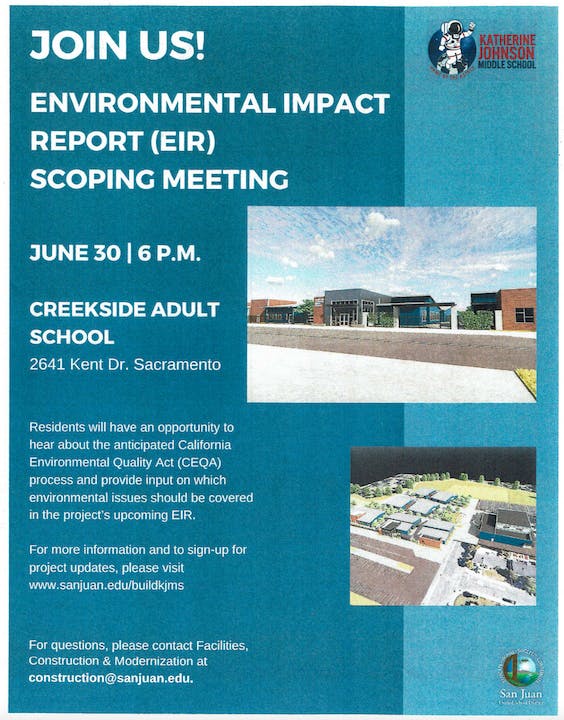 Some of the people who live around the proposed new middle school campus at Creekside found a flyer on their doorstep yesterday announcing the "Scoping Meeting" for the Environmental Impact Report the school district is hoping will slide through to a rapid conclusion. And, given the way the project is being handled by the school district and its staff, why wouldn't it fly through? You see, the new…

The San Juan Unified School District held a "community workshop" at the old Creekside School on Thursday evening, June 16th, about the proposed large middle school at Creekside. We shall begin our post by saying something nice, because if you can't say something nice about people, you shouldn't say anything. Since we DO have something to say, here are some niceties: 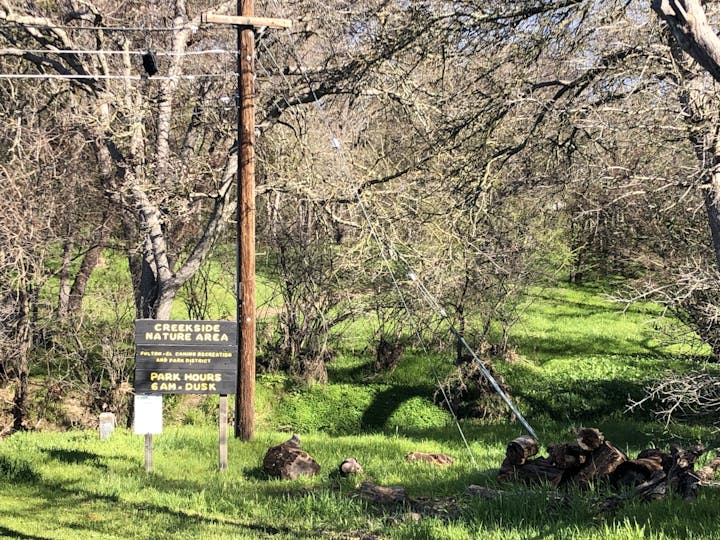 At first glance, we know the answer to the question in the title of this post. It's outside-the-box thinking - something that would benefit the entire community. Ask yourself if the school board is capable of this sort of innovation. Yeah, right. Still...it IS a viable "what if" because the floodplain area at Creekside is unbuildable. The County's Drainage Planning and Development people have told… 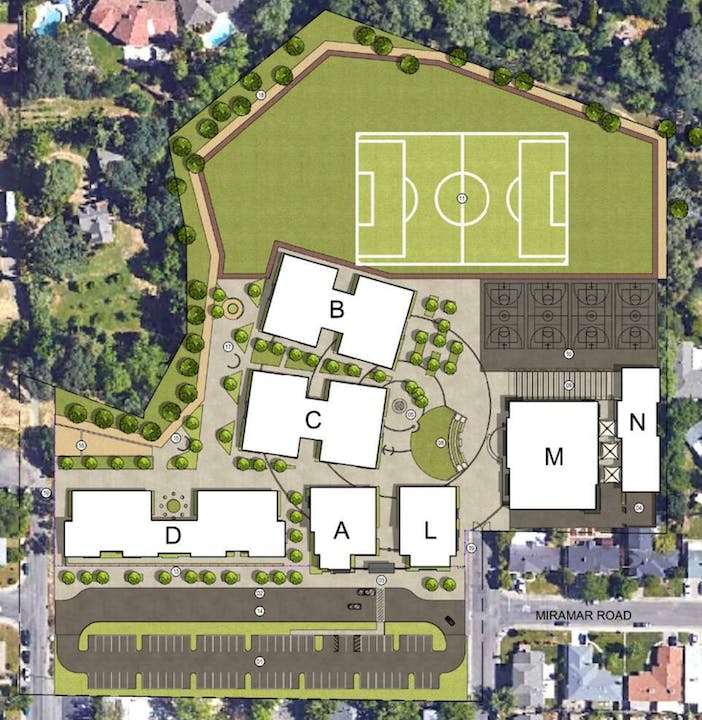 Yesterday, Friday June 10th, the State Clearinghouse published a Notice of Preparation (NOP) for an Environmental Impact Report (EIR) on the proposed Creekside Middle School. What this means is: 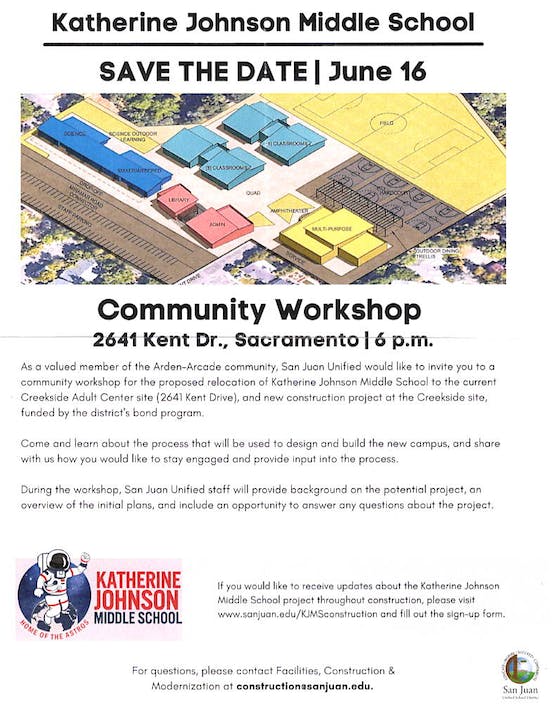 The Election Night meeting of the San Juan Unified School District's Facilities Committee went pretty much according to plan - the school district's plan, that is. Their plan is the one where the public should be respectfully subserviant to the brilliance of school district staff. So when the staff showed the Committee the the done deal campus designs for both the Arcade Middle School and the… 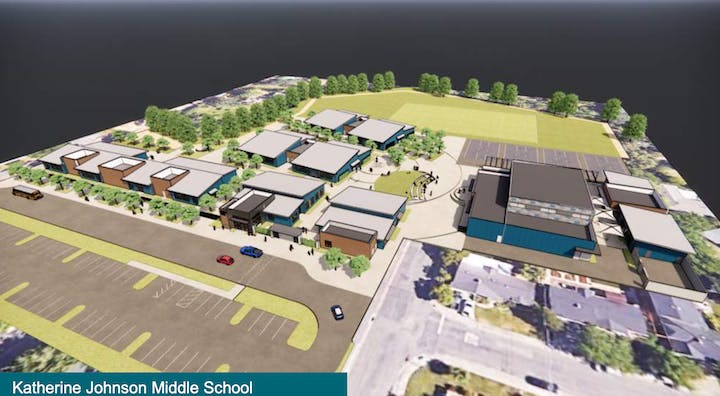 There are two San Juan Unified School District meetings about the proposed Creekside campus coming up soon. The Facilities Committee has an evening meeting on Election Day to present (AKA "rubber stamp") the design for the Creekside Middle School campus. And 9 days later the district will tell the community what it has planned. We posted about the Election Day meeting and received a response that… 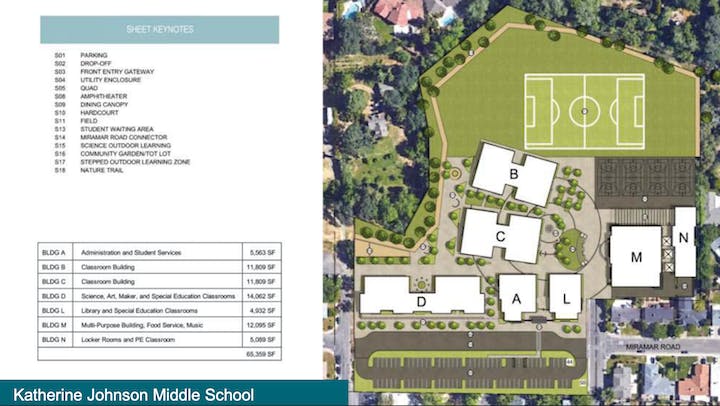 Many members of the public left disappointed and irritated after last Thursday's meeting about the Middle School Bondoggle at Creekside. But at least they could look forward to the San Juan Unified School District's next meeting on June 16th. Now, it turns out, the school district staff has found a way to make anything the public says even more irrelevant to the school district's intent to do… 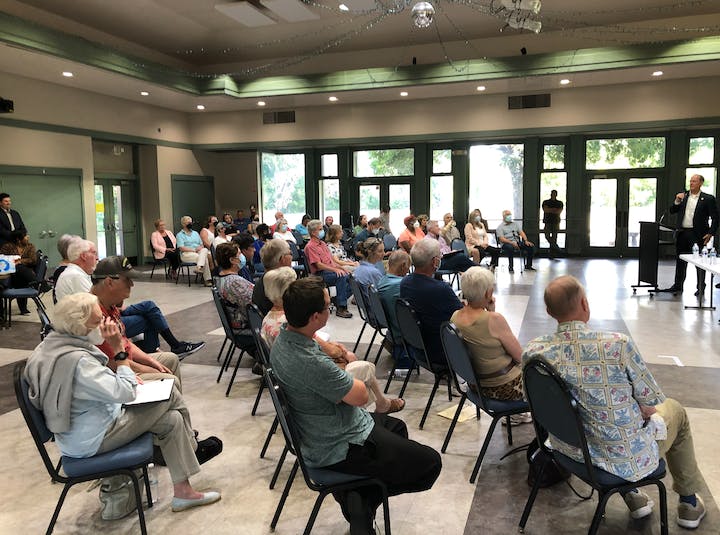 A whole lot of people showed up for Supervisor Desmond's community meeting last night about  the San Juan school district's planned construction projects. Well, actually, they showed up because they were concerned about or interested in the Creekside Middle School proposal. 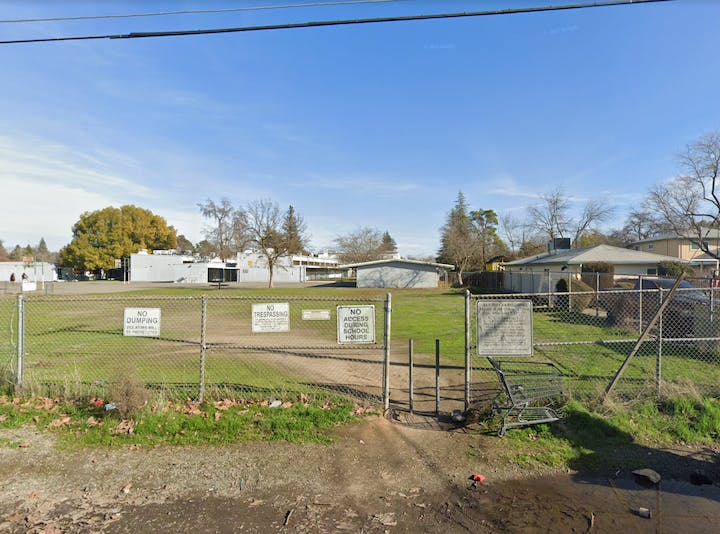 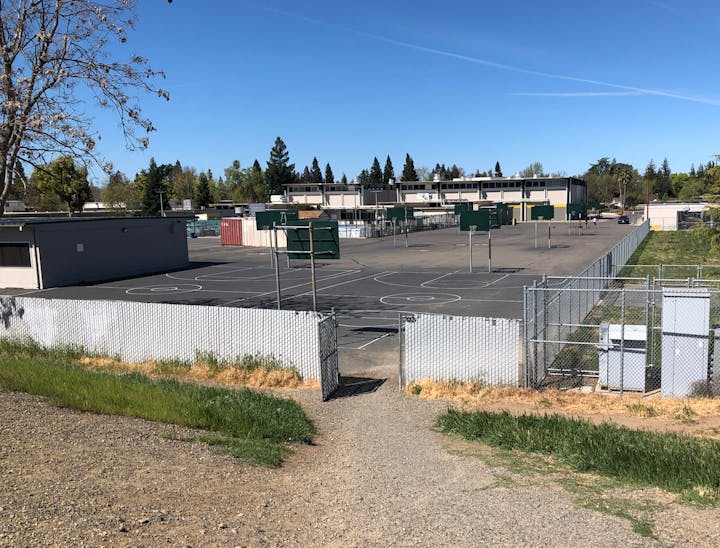 Do you live in a preferred neighborhood? One of the ways to know if you do is when the local school district trusts you to set foot on the school grounds when you feel like it. Like, for example, if you want to access a Nature Area on the other side of the school property. Down at Rio Americano H.S. they let you do that, even if you have your dog with you. You can get to and from the American… 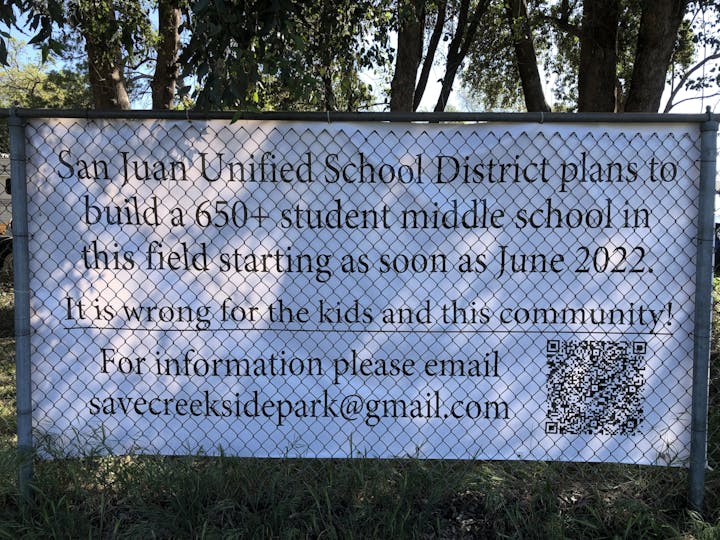 Residents of the San Juan Unified School District are finally being informed that the School Board made a decision to build a new middle school (one costing around $50M) at Creekside. The news is coming from residents of the impacted area, who were not informed until after the decision was made. Our elves tell us that the public is supposed to be told about projects of this magnitude well before… 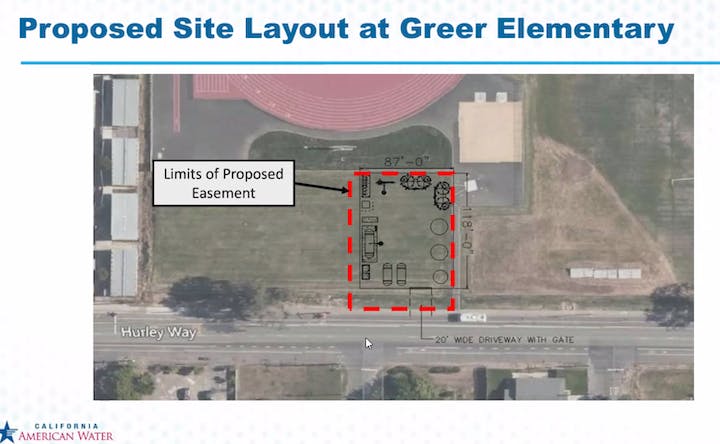 At the March 1st meeting of the San Juan Unified School District Facilities Committee the California American Water Company (a private water supply purveyor serving a portion of Arden Arcade) requested an easement for a water well at the Greer/Encina school site at the Hurley Way edge of the site, just south of the new running track. The easement would be 118' x 87'. 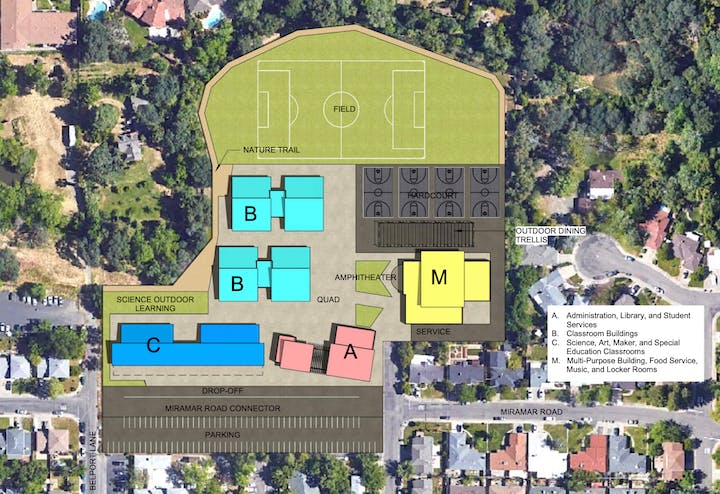 The San Juan Unified School District has released two drawings of the new Middle School proposed for the site of the old Creekside Elementary School. The design is something like a size 10 foot trying to fit into a size 7 1/2 shoe. Among other things, shoving the athletic field as close to Chicken Ranch Slough as possible could require a 6 or 8-foot flood-prevention retaining wall. That's not good… 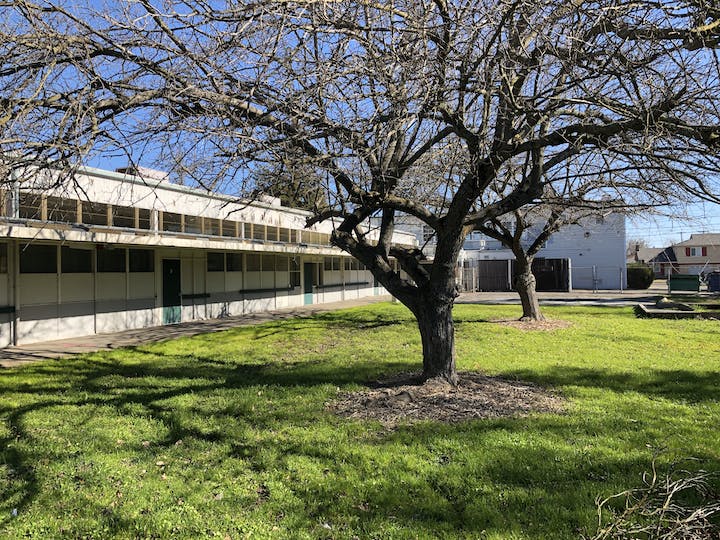 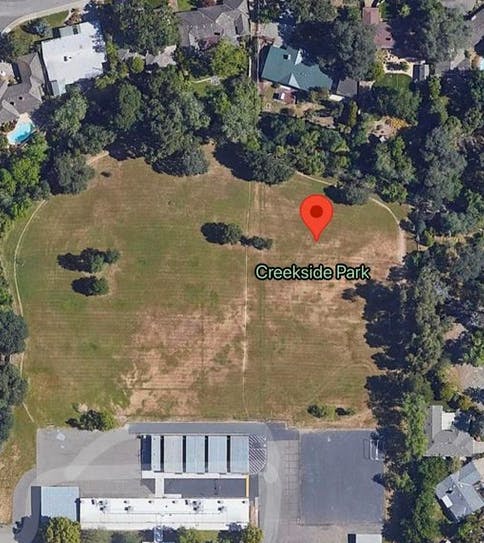 How did the nearby neighborhood learn that the surplus school property in their neighborhood would be converted into a new, large middle school? Drilling contractors showed up with heavy equipment to take soil samples. Neighbors - many of whom work from home because, you know, Covid - could not help but notice something going on. So it got posted to the "Arden-Arcade and Carmichael Community Talk…